“Sustainable period products”: Focus on the winning project of the Green Challenges Campaign 2021 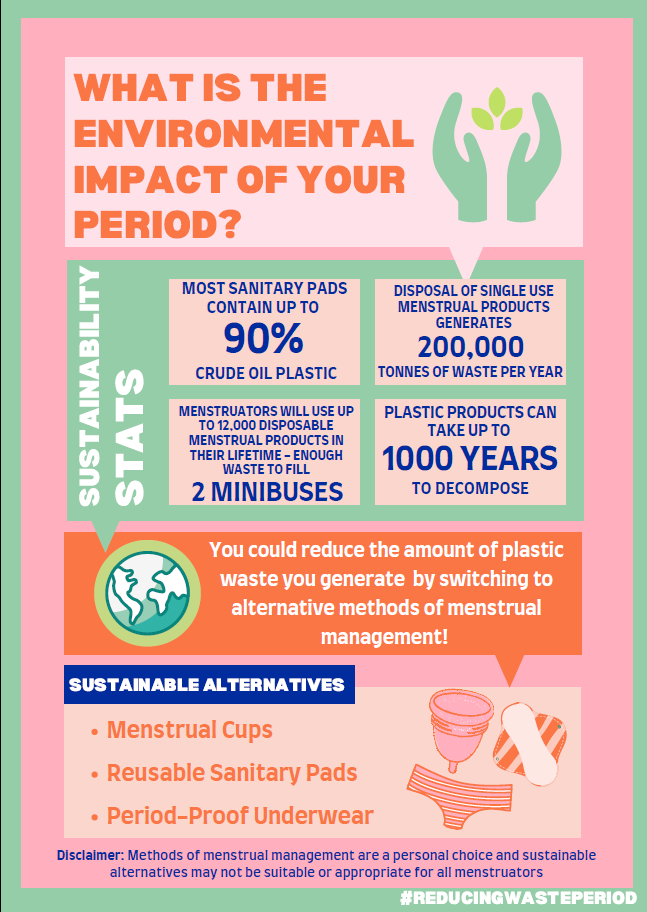 Do you really know what the environmental impact of period products is? Did you know that most sanitary pads contain up to 90% crude oil plastic? Most people don’t.

Therefore, Emma and Georgia, both incoming Third Year Law Students from Trinity College Dublin with a background in period poverty advocacy, started a project to raise awareness about those topics.

Georgia is involved in The Pad Project, an NGO working to create local and global partnerships to end period stigma. She is also currently researching period poverty and access to period products with the Laidlaw Foundation. Emma is working with the Plan International Youth Advisory Panel, a global children’s charity. Through their work, they realized that we can’t have a conversation about period poverty without talking about waste impact. Then, they created “Sustainable period products”, a project as part of the Green Challenges campaign launched in the framework of UNI-ECO. Emma and Georgia’s goal is to engage the student community about period’s environmental impact. During the first UNI-ECO Summer School in July 2021, their project won the Green Challenges by decision of the judging panel composed of UNI-ECO partner universities’ representatives.

Today, they share with us their experience, the difficulties they faced and their advices to start a project on sustainability.

Can you explain us how the project started?

Emma: Georgia came to me with this idea, saying that UNI-ECO was looking for project ideas, and that it could be cool if we could combine our backgrounds in period poverty advocacy and focus on the environmental impact dimension. We took hold from there, submitted the application and came up with the idea of the information campaign and the survey.

Georgia: We got great support from the Trinity staff. Paula Murphy, Michele Hallahan, and Simone Cameron-Coen really brought out a lot of expertise and gave us the best channel to disseminate information. We couldn’t have done the same without them being so enthusiastic and supportive.

How was the work organized between you and Trinity staff?

Emma: They gave us an adviser (it was Simone), and whenever a deadline was coming up, we had a meeting with her and if we had any doubts, if we didn’t know where to disseminate the information, she would advise us about best practices: budget management tools, communication strategy, etc. Her help was very valuable.

How did you organize yourself in the team? Did you have specific work assignments?

Emma: We divided the work pretty much equally, we tried to fit in regular meetings and we tried to be cautious with our schedules. In terms of specific roles, I’d probably say myself I am more involved in designing and infographics and posters for social media campaign. And Georgia was kind of responsible for dividing and managing our budget. We were also both conscious not to overburden each other, would you say that, Georgia?

Georgia:  Yes, completely! And I think we were lucky that it was something that we were so interested in, because then splitting up the work and doing the research, it didn’t feel like heavy work. It was enjoyable addition to what we’re doing here at the university.

Did you face any difficulty in getting organized during the Green Challenges campaign? How did you cope with it?

Emma: Both of us are quite busy with internships and part-time jobs, and we are also working on different projects. It was very difficult to find a balance with those other commitments, so we just talked to work around our schedules, plan meetings well in advance, create a timeline that worked with our schedule, and it required meeting minutes when one of us could not make it.

Also, I think one of the greatest challenges over the summer was just trying to engage key stakeholders and people who wanted to be involved in our project in Trinity. It was kind of a waiting game, that was quite difficult just emailing and then waiting for a couple of weeks for response and not knowing whether they were on board or not.

And about your project specifically, did you face any issue?

Emma: Maybe not an issue but something we ought to be conscious of throughout this whole project is understanding that sustainable alternatives, probably primarily menstrual cups are not accessible or suitable for every menstruator. This is a deeply personal and often sensitive topic.  We recognize that, and we include a disclaimer about that in each of our posters and infographics as well. We were just ensuring to be inclusive and accessible in that way.

Talking about inclusivity and about engaging as much people as you could, was it difficult to involve men in your project?

Georgia: There is a moment that stuck with me regarding male involvement. I was at a Green campus Committee meeting which is like an alliance on sustainability on campus. Michele (Hallahan) was introducing the project and there was a man there. And he said he has a daughter who just turned 13 and she went to pick out products and told him there was plastic in all of them. He was like “It’s so great that we have the resource to have this conversation” and that was something that really stuck with me because I was worried about that as well, how people see the project and if they think that is an important thing or that it is too personal. That made me feel a bit more like I could talk about it. I was also afraid of the age barrier because it’s a subject that comes up a lot in advocacy with young people, but not so much with our parents’ generation.

Emma: Yes, it was so encouraging. I’ve been blown away by the encouragements we received from Michele and Paula, the student’s union, the Green Campus Committee and UNI-ECO of course.

Did you have a social media strategy?

Georgia: We are going through the Trinity channel because they have quite a lot of followers.  We thought that would be a better way to reach everyone. So, we have this social media campaign and then the poster we are going to put up in campus. We’re not going to print too many, obviously this is all about sustainability, but we just thought that is the way that most people will see them because everyone uses a bathroom and maybe not everyone uses social media.

Emma: Yes, and I think in addition to social media, one of our main ways of disseminating the information campaign will be through college wide emails. Students’ union has committed to share, which is great because their emails reach every single student in Trinity. So, it’s exciting to know that during key thematic weeks in the college, like Green Week or Health Week, our information will be going out, reaching every student on campus!

What was your best victory?

Emma: Winning the summer school! It just increased our confidence with the project, about how people were taking it seriously and could really see the potential impact of it, which is really exciting for us! And of course, receiving more funding for the project and being able to invest that in more sustainable products to provide for our survey participants or potentially reaching like a wider range of people. Then as well, I don’t know about you, Georgia, but I think that story that you just told there about that member of the Green Campus Committee and his daughter?

Georgia: Oh yes, I talk about it all the time! But I mean, any moment where our project has made people stop and think, or even made the switch from disposable product to sustainable alternative is a victory for us.

Do you have any advice for students who would like to start a sustainable project?

Georgia: I would say, definitely use the resources that you’re given. We were in contact with Simone and Michele but also with people outside the Trinity community (Emma with Plan International and me with the Pad Project). So, I think if you have prior knowledge of the issues and it’s something you’re especially passionate about, it becomes a lot easier.

Emma: Yes, and just in terms of organization, play to your strengths and to do what you know you’re talented at and what you’re passionate about and divide the work accordingly. We encourage other teams to play on their strengths and know what they’re good at! 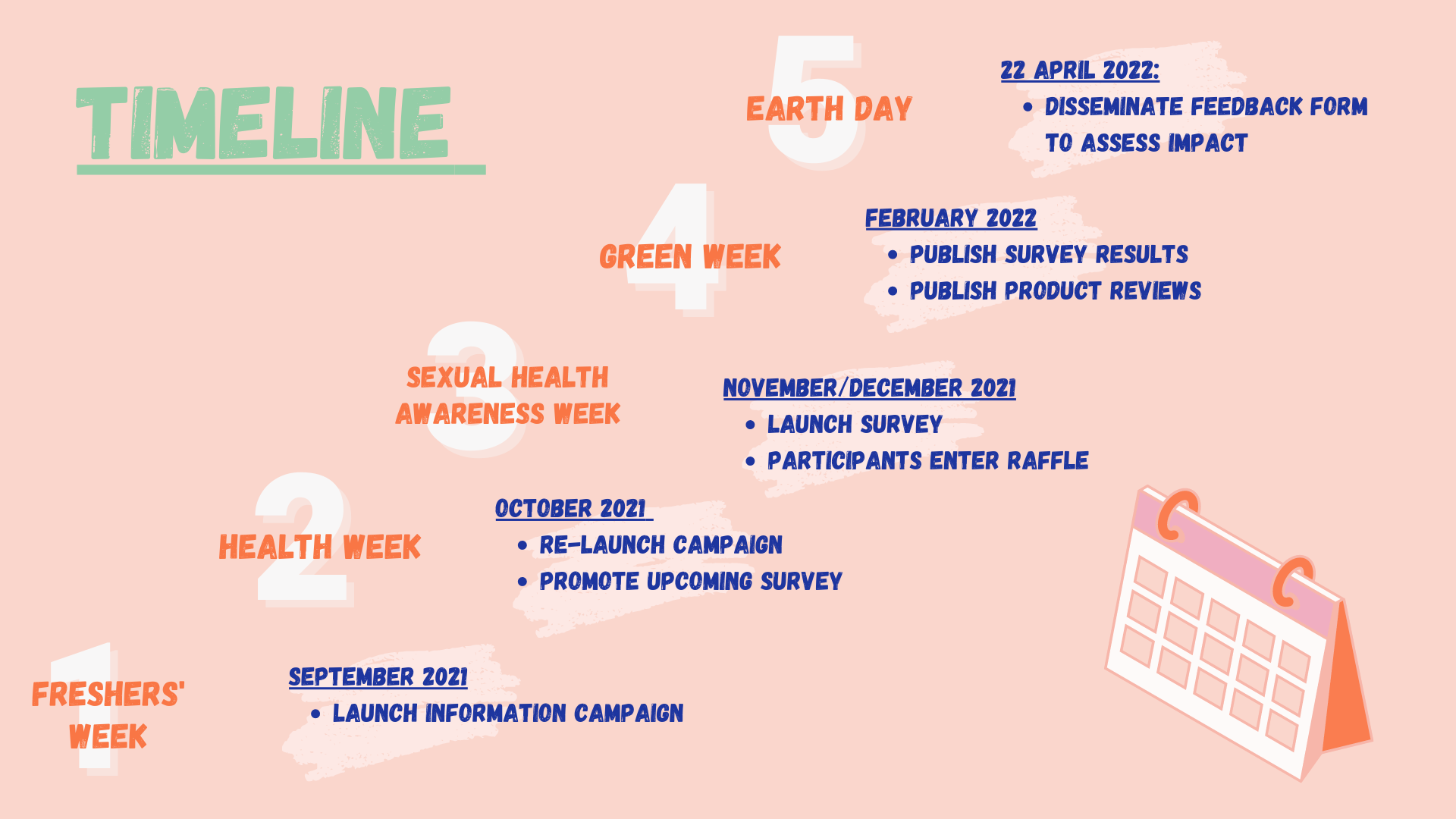